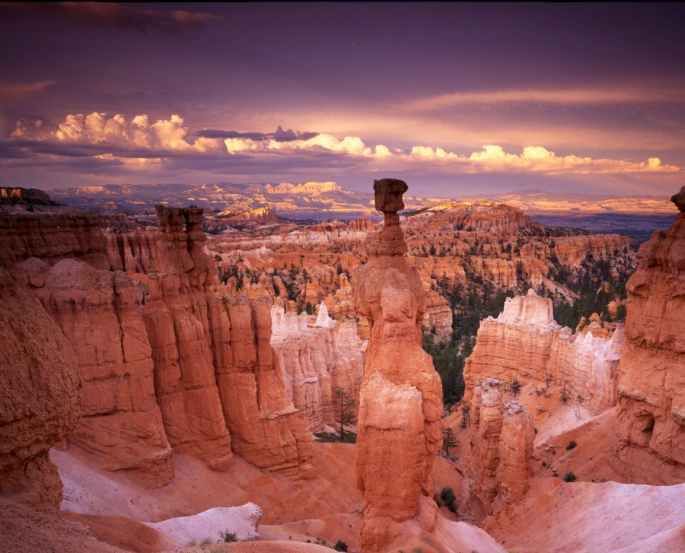 The last canyon visit scheduled from Vegas was to Bryce and Zion.I will be covering Bryce in this episode and Zion in my next episode. They are located in the state of Utah.

Before I actually give you the tour details, I need to explain the geology of the place to give you an idea of what lay in store for us in the tour.

Bryce Canyon National park lies within the Colorado Plateau and is strictly speaking not a canyon at all!!. It is a collection of uniquely shaped rock formations  which resemble a collection of amphitheatres in the Paunsaugunt Plateau . The rocks are in red, white and orange colours and offer spectacular views…the colour often changing due to the direction of sunlight.  The distinctive feature of Bryce are the HOODOOS… the effect of frost weathering of rocks and crevices.

HOODOOS are tall thin spires of rock that protrude from the bottom of an arid drainage basin or badland and consist of relatively soft rock topped by harder , less easily eroded stone that protects each column from the elements.

Before the hoodos were formed , the area was full of water. Utah was a mountain encircled basin. For millions of years, the rivers deposited sediments into a large system of lakes. When the lakes dried up over the years, muddy limestone walls remained. Weathering and erosion shaped these rocks further. Almost 200 days in a year, the area sees wide temperature swings between freezing nights and warm afternoons. This is what causes frost weathering. As the snow and ice melts, the water seeps into the crevices in the rock. When it refreezes, it expands and causes cracks or windows .  As the windows enlarge, their tops collapse leaving columns. This phenomenon happening repeatedly over millions of years has resulted in the formation of Hoodoos.

The shop at Panguitch where we picked up the woollens

After that, we stopped at a Subway joint and picked up breakfast of our choice and headed to Utah.

The drive was through desert roads with orange and pink rocks on either side. We were in for a pleasant surprise….a natural arch of sandstone across the road…like a tunnel. There were two such tunnels called the Red Rock Arch Tunnels which have served as the unofficial gateway to Bryce  and Red Canyons

After a short drive we were at the Visitor centre and parking area of Bryce Canyon. The Guide accompanied us to the walking paths and explained to us about the two main lookouts here. He then asked us to follow the sign boards and visit both the lookouts . The more adventurous, could do a small hike down to see some of the hoodoos at close range.

We decided to stick to the main walking path and after following that trail, reached a lookout from where we got a great view of the Bryce amphitheatre which is a hoodoo filled depression lying below the hiking path .In the far distance, we could see the Grand Canyon too….as explained by the guide.

Close up of the Amphitheatre

After enjoying the views , we walked up to the sunrise and sunset points on the trail and got some amazing views and pictures.

Some views from the lookouts….

Close encounters of a rocky kind!!!

Besides hiking trails and camp grounds , Bryce is also an important stargazing destination. The high elevation, the clean dry air and lack of light pollution, makes it a one of the darkest places on earth. This makes it a stargazers paradise. They have guides called the Dark Rangers who offer moonlight walks among the hoodoos. But for all such activities, one must have more time in hand and of course should plan well in advance!

All in all…..another of nature’s marvels…lucky to have seen it…

After the walking and small trekking, we returned to the van at the appointed time to proceed to Zion National park which will be where we meet next week…till then, goodbye and soak in the hoodoos…