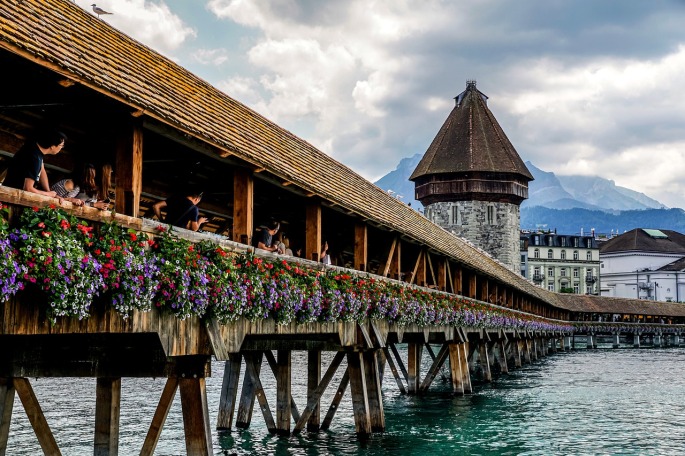 Lucerne is considered the most beautiful city in Switzerland and one of the most visited places in Europe.

Towards the end of the last episode, we were at the Rhine Falls in Switzerland after crossing over from Germany. Our next destination in Swiss country was Zurich from where we would go to Lucerne after an overnight halt.

Driving through Switzerland is a wonderful experience with vast areas of green farmland with some grazing cattle and bundles of hay against the backdrop of the snow covered Alps. The Swiss chalets or wooden houses add to the beauty of the place. Now and then, you pass small streams and rivers with pristine clear water and of course some amazing lakes with water in different hues of blue and green.

Let us enjoy some pictures of Swiss countryside….

A Swiss Chalet or wooden house

A small stream flows by

And a beautiful lake

We were headed to Zurich.

Zurich is Switzerland’s largest city, located on the banks of Lake Zurich, about 60 km from the foothills of the Alps. It is a financial hub in Switzerland and has many financial institutions and banks located here. It is also a major contemporary art and shopping destination.

The city centre and most of the city’s architectural features extend along the shores of River Limmat which runs through the city centre.

After a short drive through Zurich, we had an overnight halt at a hotel there and proceeded to Lucerne

Some pictures from Zurich…

The Limmat river in Zurich

A typical street in Zurich

Lucerne is a predominantly German speaking city in central Switzerland, located on the shores of Lake Lucerne and River Reuss. Its closeness to Mt Pilatus in the Swiss Alps, well preserved medieval core and elegant historic buildings makes it a tourist’s delight.

The Chapel Bridge (Kapellbrucke in German) is iconic of Lucern.

It is a 204 mt long covered wooden bridge running diagonally across the river Reuss. Originally built in 1333; it is the oldest covered bridge in Europe! Most of the bridge was destroyed in 1993 but it has been rebuilt. The bridge runs close to the Water Tower, a fortification from the 13th century. The bridge and tower are one of the most photographed scenes in Switzerland.

The inside of the Bridge has 17th century paintings depicting the history of Lucerne. The bridge has beautiful flower beds all along its sides and makes it a beautiful sight to behold!

The bridge and Water Tower

The Bridge, the Water Tower and a palace on the hill!!!

The town of Lucerne sits on the banks of this beautiful lake which has an irregular shape with snow clad mountains forming the backdrop. Just close your eyes and imagine the scenery I just described. I bet you got transported to Lucerne virtually!!!

One can enjoy a cruise on the Lake on one of the early 20th century steamers here.

After the lake and the bridge, we took a walk along the town . Some pictures….

Outside one of the shops at Lucerne

And we ladies posed for a picture….

We then visited the Lion Monument.

This monument is in honour of Swiss soldiers who died in the French Revolution. Built inside an abandoned stone quarry, it features a dying lion.

At The Lion Monument

The old town on the right bank of the Reuss, still preserves many old houses and the timber framed buildings bordering the stone streets give it a fairy tale appearance. Not to mention the flower beds hanging beside the windows!

With a bag load of memories of this quaint city, we headed to Engelberg for the much awaited visit to Mt. Titlis. See you next week on the Alps…